Introduction to the exposition “Stay at home” FULVIO JURIČIĆ 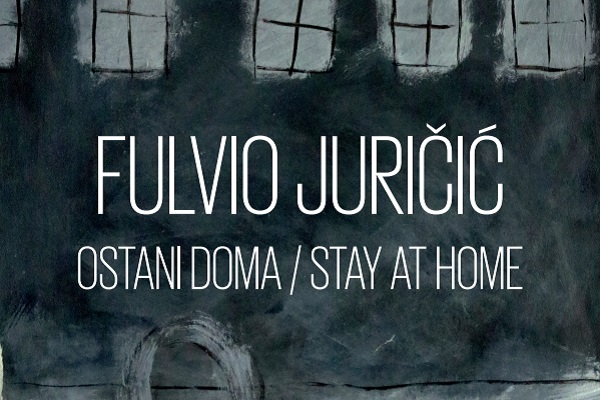 During the period of twisted values, irregularity between the life and its appearance the lucidity is essential and becomes the ductus of survival. The ability to analyse things and their meanings, invisible to the eye and unreachable to the heart must become NOW at the very moment. Without any postponement since uncertainty, closeness of death, anticipation of the world change, compensate the distance. We are all at home. We stay at home, in our rooms with our own symbols and memory patterns. The maturation of conscience is speeding up, the experience of reflecting nihilism is growing, during the processes of imposed introspection we are forced to reduce everything, and our desires and our feelings and our movements.

We are left with the bare instinct of survival and some tiny gestures of humour or anger. Juričić is well aware of that scale of changes of the new age and he describes it in his new neo-existential cycle of paintings Stay at Home. Like Heron, he takes us on a trip towards universal point which destroys tiny line between outer and inner imaginary of the self. The atmosphere on the paintings is exalted, sublime, humble in Teresian way. The artist creates such atmosphere using common art instruments of the Informel, the style of painting Juričić acquired in his youth giving it some fine tuning in accordance with his own hand. His lifelong devotion to the Informel, the style of modern art which tried to go deeply into the human mind using rationalisation and the process of the abstraction of the visible, the outer.

That style enabled him to express his character which is composed of the discipline and rationalism hiding tamed passion, enormous energy and optimism. His new expression combines past cycles, especially in the manner of grading composition through monochromatic planes, by adding achromatic planes where he gives up from colours. The innovation of his artistic expression, presented in this cycle of works, is his play with multiple perspective and that gives the additional value to the individualism and modernity of his work.

Juričić easily plays with different kinds of perspective from ascetic simple vertical Romanic one to reversed gothic used by the modernists as Henri Matisse and traditional geometric and coloristic modernist (he applies achromatic modernistic version). Analog to his poly-perspective space, the painter creates illusion of random spaces joined by infinite distant directions passing through all the parallel planes of the indicated objects and symbols of the interior such as tables, chairs, walls and windows expanding the space itself to the infinite plane. Through abolition of classical logic of the space Juričić semantically and subconsciously approaches to the quant idea of the space liberated from the limits of time and space where the composition itself becomes iconic, and the work becomes metaphysical. That’s where one can find Juričić’s artistic forte – modernity, dynamism and surrealism of this new artistic cycle.

Paintings are finished by the subversive gesture – interpolation of the basic symbols of the interieur such are Stančić’s armchairs and Matisse’s mobiliary with the hint of expressionist, quick contouring of their form and dynamization of the space by the use of technique grattage (scratching the surface with the sharp object). Layers of the colours, though might seem thin and delicate, are patiently structured as the finest filigree of the pigment. Juričić’s painting The Last Art historian and ethnologist Kristina Tamara Franić Introduction to the exposition “Stay at home” Banjole, Zavičajna galerija Crnobori – ZGC Gallery, December 22nd 2020 FULVIO JURIČIĆ

Supper is little jewel of the affirmative Informel where one can trace traditional comprehension of the painting including the confirmation of the form and composition, implying the content based on the personal experience and worldview of the beholder. The painting resonates in the solemn surrealistic tone due to the use of non-colours. Patterns of the white strokes of spots resembling the light additionally enforce the impression. The message is crypted, introvert and then again astatic in the state of many possible incomes. It touches the core of the abys between the psychological, ethical and religious state of mind, between old and new. Juričić paints fast and without burden transfers his emotions to the canvas as one can see through his stroke. Easily as the true master he determines the spiritual base of the composition and white lights are his witnesses of the personal existentialism, optimism and hope. Some of his motifs on the paintings – mobiliary, beloved dogs, bottles or fish, confirm his compassion and joy of life and himself. In spite of his unconscious transcendence of reality, he likes tangible life where small things offer great spiritual pleasure. Still – he is the child of the Mediterranean. Through this unique cycle Stay at Home Juričić confirms his sense of modernity in Croatian contemporary painting where he participates as the painter and educator for fifty years. This cycle and his entire work confirm his inexhaustible and never stopping artistic energy.

This website uses cookies to improve your experience while you navigate through the website. Out of these, the cookies that are categorized as necessary are stored on your browser as they are essential for the working of basic functionalities of the website. We also use third-party cookies that help us analyze and understand how you use this website. These cookies will be stored in your browser only with your consent. You also have the option to opt-out of these cookies. But opting out of some of these cookies may affect your browsing experience.
Necessary Always Enabled

Any cookies that may not be particularly necessary for the website to function and is used specifically to collect user personal data via analytics, ads, other embedded contents are termed as non-necessary cookies. It is mandatory to procure user consent prior to running these cookies on your website.